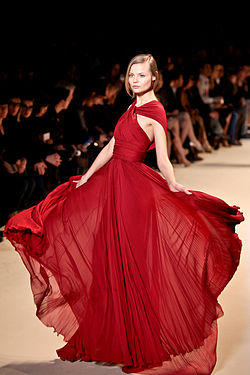 Fashion is an aesthetic expression in lifestyle, accessories, clothing, jewellery (rings and bracelets often made from precious metals), footwear, makeup, hairstyle, textiles and body proportions around the world.

A trend can often connote a very specific aesthetic expression and lasts shorter than a season, style often lasts many seasons, and fashion is a distinctive and industry-supported expression traditionally tied to the fashion season and collections.

While there are many cities that hold fashion events, there are four global cities most associated with fashion: London, Milan and New York and Paris. In fact, these big four hold fashions weeks twice a year.

With increasing mass-production of consumer commodities at cheaper prices (and with global reach) sustainability has become an urgent issue amongst politicians, brands and consumers.

Prior to the mid-19th century, most clothing was handmade for individuals, either as home production or on order from dressmakers and tailors. The concept of a global fashion industry was made possible after the industrial revolution. With the rise of new technologies like the sewing machine, the rise of global capitalism and the development of the factory system of production, and the proliferation of retail outlets such as department stores, clothing had increasingly come to be mass-produced in standard sizes and sold at fixed prices in the 20th century.

Fashion is an international and highly globalized industry, with clothing often designed in one country, manufactured in another, and sold worldwide, despite being developed first in Europe and America.

For example, a Canadian fashion company might source fabric in China and have the clothes manufactured in Vietnam, finished in Italy, and shipped to a warehouse in the United Kingdom for distribution to retail outlets.

The fashion industry has long been one of the largest employers in the United States, and it remains so in the 21st century. However, US employment declined considerably as production increasingly moved overseas, especially to China.

Because data on the fashion industry typically are reported for national economies and expressed in terms of the industry's many separate sectors, aggregate figures for world production of textiles and clothing are difficult to obtain.

However, by any measure, the clothing industry accounts for a significant share of world economic output. The fashion industry consists of four levels that consist of many separate but interdependent sectors :-

There are many organisations and websites that deal with fashion :-